If left for too long, the tears encourage the development of arthritis,” Domb says. “My No. 1 goal is to cure arthritis through early diagnosis and treatment of the original injury. When labrum tears are treated quickly, arthritis is prevented before it can set in.

The American Hip Institute Research Foundation is honored to have had not one, but two of its studies selected as finalists for Arthroscopy Journal awards.

The American Hip Institute Research Foundation is honored to have had not one, but two of its studies selected as finalists for Arthroscopy Journal awards. The study by Domb et al on “Circumferential Labral Reconstruction in the Primary Setting” was selected for Clinical Research Excellence and the study on how “Surgeon Experience in Hip Arthroscopy Affects Outcomes” was selected for Systematic Review Research Excellence. Congratulations to the researchers at AHIRF!

Proud to announce this publication of the largest study ever to report successful outcomes of hip arthroscopy, in over 1000 American Hip Institute patients, with 5-year follow-up.

Proud to announce this publication of the largest study ever to report successful outcomes of hip arthroscopy, in over 1000 American Hip Institute patients, with 5-year follow-up. See study as published in the American Journal of Sports Medicine.

Orthopedics Today interviews Dr. Benjamin Domb on new study from American Hip Institute on role of PT vs. hip arthroscopy for labral tears in the hip

Orthopedics Today interviews Dr. Benjamin Domb on new study from American Hip Institute on role of PT vs. hip arthroscopy for labral tears in the hip.

Throughout my career, I have often heard people reference the hip as the wallflower or “forgotten joint,” when the hip is one of the largest and most important joints in your body. While the hip does allow for a wide range of movement, it is not indestructible, and many people of all ages suffer from hip pain and injuries. It’s also a difficult area for patients to localize and articulate to their physician when they experience discomfort, which often delays treatment or leads to misdiagnosis.

Dr. Domb lectured on “SEX Without Hip Pain” at the Chicago Ultimate Women’s Exposition, with an attendance of 18,000 of Chicago’s proud women.

"Hip injuries can interfere with sexual intercourse for a woman, and the associated pain can cause decreased libido", said Dr. Domb. "Fortunately, many injuries can be treated non-surgically, or with minimally invasive procedures."

The American Hip Institute recently opened its doors as the first clinic in the U.S. to specialize exclusively in hip injuries. Its mission is "to serve as a resource to surgeons and their patients; to educate, innovate and offer the most advanced and comprehensive treatment options for injuries of the hip joint".

Sciatica is one of those things that you might think you won’t have to worry about until later in life. As one Well+Good editor (hi, Abbey!) recently learned the hard way, however, back and hip pain symptoms can and do happen to active younger people, and our lifestyles, which tend to involve extremes of intense activity and longterm sitting, are mostly to blame.

Everything You Need to Know About Hip Pain

Kyle O'Flaherty used to be stoked by his weekly workout routine, a heavy rotation of cycling, boxing, jiu-jitsu, and running. But even at age 20, his hips started to ache, and not just during exercise. He's not unusual. "I've seen a tremendous spike in young, active men with hip pain in my practice in the past five to 10 years," says orthopedic surgeon Benjamin Domb, M.D. In fact, more 45- to 54-year-olds are opting for hip replacement, according to a National Hospital Discharge Survey. Follow our guide to stay out of the OR and keep your hips pain-free.

Raising the bar for a successful hip replacement or resurfacing: Making a joint that feels so normal, the patient forgets they had surgery.
Source: healio.com

In this study, we sought to raise the bar for success in hip arthroplasty, essentially defining success as a surgery that the patient forgets that they had. Using the new forgotten joint score, we were able to show that the patients in our series almost never think about their hip surgery, as their resurfaced or replaced hips feel like and function like a normal hip,” study co-author Benjamin G. Domb, MD, told Healio.com/Orthopedics. “At our institution, Birmingham hip resurfacing is considered an excellent surgical option for the middle-aged, active male with hip arthritis.

Join AMITA Health orthopedic surgeons Dr. Robert J. Daley and Dr. Benjamin G. Domb as they discuss how robotic arm-assisted joint replacement can help you or a loved one. This seminar is free, however registration is recommended. Light refreshments and appetizers will be provided.

Dr. Domb quoted by Equinox on drugs prescribed to athletes 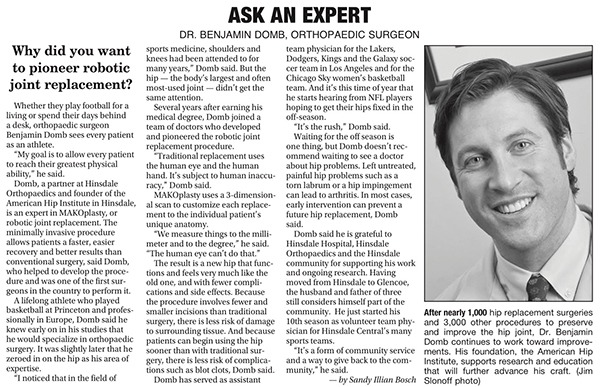 Diabetes And Your Bones

About youth sports injuries, and how to prevent them:

Hip injury forces CSO's Muti to bow out of concerts

How long will hip injury keep Avery Bradley out?

Matt Forte downplays back injury: ‘I'll be all right'

Colts' QB Matt Hasselbeck leaves game with yet another injury

Bucks' Jason Kidd out indefinitely with hip surgery on Monday

Cowboys QB Tony Romo out for season with fractured collarbone

Arthroscopic hip surgery with a microfracture procedure of the hip: clinical outcomes with two-year follow-up

"Keenan Lewis suffers another setback after injuring MCL vs Redskins"

Skylar Diggins' Injury Another Kick In Gut For Shock

Dr. Frank Jobe, a true game-changer, should be in Hall of Fame

Gary Nolan one of many careers saved by Dr. Frank Jobe

Dr. Domb Does Charitable Surgery for Victim of Terrorist Bombing

Dr. Domb selected by N.Y. Times as Top Doctor for Hip Arthroscopy Click on the thumbnail for enlarged view 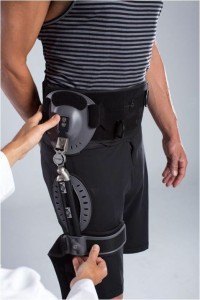 If the Shoe Hurts...

You will need the Adobe Reader to view and print these documents.

Doctors at the American Hip Institute® understand surgery can be a challenging process for patients.

View more about our faculty

American Hip Institute in the Media

We want to hear from you.

Request an appointment. send us your question